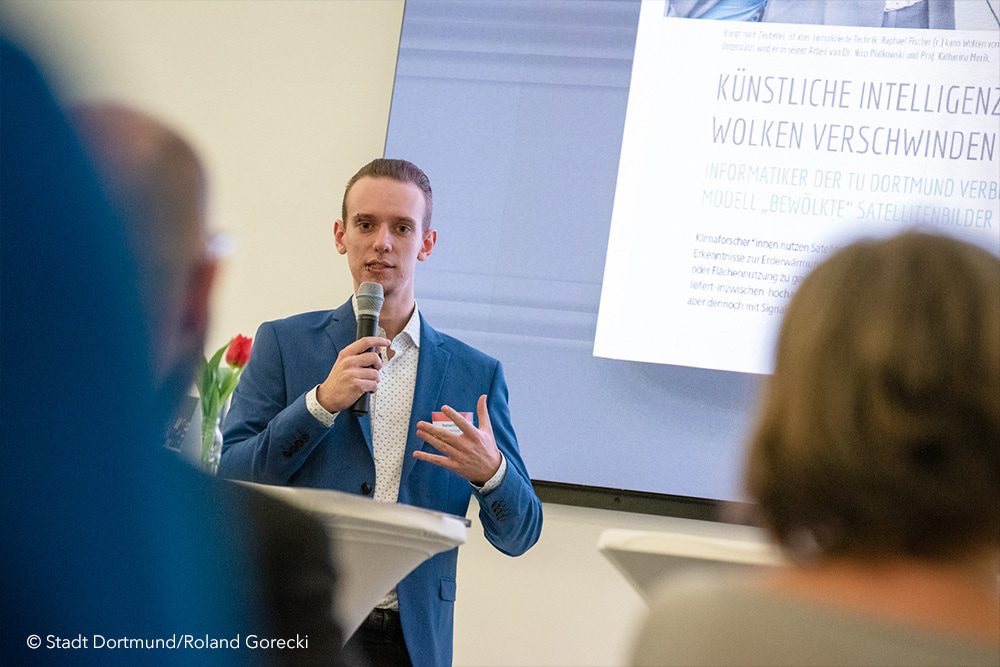 Raphael Fischer presented his research on the completion of spatio-temporal datasets at the book launch of “Dortmund Überrascht. Dich”. Using Machine Learning techniques, Fischer reconstructed satellite images in which parts of the earth’s surface were obscured by clouds. At the event, the mayor of Dortmund Ullrich Sierau emphasized the importance of the ML2R for the Rhine-Ruhr region.

The work of ML2R researcher Raphael Fischer is featured in the newest edition of “Dortmund Überrascht.Dich” (“Dortmund Surprises.You”). In his research, Raphael Fischer works on generative Machine Learning applications which enable the user to reconstruct incomplete spatio-temporal datasets. His supervisor is speaker of the ML2R Prof. Dr. Katharina Morik.

In the case at hand, satellite images from an area in the South of France as well as the Western part of Germany at different times of acquisition were used. Satellite images offer valuable insights into developments on the earth’s surface and can for example display effects of climate change as well as levels of urbanization and agrarian use of land. A central problem here is the occlusion of the earth’s surface by clouds. Working with his colleague Dr. Nico Piatkowski, Raphael Fischer extended mathematical formalisms in order to incorporate existing knowledge about the earth’s surface in the learning process of the underlying algorithm. The training of the algorithm was based on data from areas which were not covered by clouds. Based on the resulting model, probabilistic predictions about the covered areas were made in order to fill gaps within the satellite images.

At the event, the mayor of Dortmund Ullrich Sierau emphasized the importance of the ML2R for the city of Dortmund and the Rhine-Ruhr region. “The Competence Center for Machine Learning Rhine-Ruhr with a presence in Dortmund is an important location factor for the region. It is time for the research on Artificial Intelligence and Machine Learning to be institutionalized and hence consolidated long-term. The ML2R as a research center and partner is a real asset for Dortmund, the Rhine-Ruhr region and the companies in the area,” said Sierau.